The two “trees” in the Garden of Eden 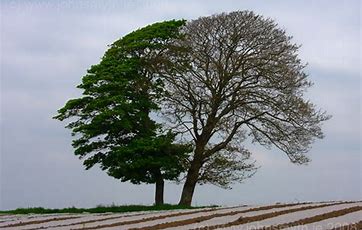 God placed Adam and Eve in a perfect place with no sickness, no death, no aging, no worries, the Garden of Eden.  In this place, God gave them one single rule.  What was that one single rule that Adam and Eve broke, that eventually lead to sickness, pain, and death?  The Bible teaches that there were two symbolic trees in that Garden…the Tree of Life and the Tree of the KNOWLEDGE of Good and Evil.  The “fruit” of the TREE OF LIFE is ETERNAL LIFE.  The “FRUIT” of the other tree, the tree of the knowledge of good and evil is SIN and DEATH.

Of course, one may ask…why does the fruit of the 2nd tree produce sin and death?  Can’t people choose GOOD?   That’s a really good question.  Fact is, the name of that tree is a little bit of a Misnomer.  What that tree ACTUALLY represents is the IDEA that WE, OURSELVES, ALL BY OURSELVES, can FULLY DECIDE what is GOOD and what is EVIL…WITHOUT our Creator’s help!  It’s the “we got this”…attitude, we don’t NEED YOU!    We could blame Adam and Eve for the mess that we’re in now, except for one thing.  All of humanity has feasted on the fruit from this tree!

Did God warn Adam and Eve??  Yes He did!  God told them that if they were to eat from the 2nd tree, the knowledge of Good and Evil, they would SURELY DIE!!  Adam and Eve really had no concept of death because there was no death in the Garden. They had no real idea what death was, but they definitely understood that it was something bad.  Why was that tree in the Garden in the first place?  We really don’t know for sure, there are many theories, but all we know is that it was.

Once Adam and Eve ate from the forbidden tree, they were banned from eating from the Tree of Life. This is because the soul that sins will die.  Sin isn’t a permanent condition.  It will eventually destroy everything it touches, including humanity.  Eternal life is only found in the Creator, so there can be no eternal life for anyone who rejects their own creator.  After the Fall, mankind was driven from the Garden of Eden, and God stationed Angels with flaming swords to guard the way to the Tree of Life.

Thankfully, God had a plan, a Divine Rescue plan, to offer mankind a second chance.  God’s plan was to build a bridge that would cross over the giant chasm between God and man, created by the Fall, so that once again, man would be given access to the Tree of Life!

Genesis 3:24: So He drove the man out; and at the east of the garden of Eden He stationed the cherubim and the flaming sword which turned every direction to guard the way to the tree of life.

"Fixing our eyes on Jesus...Who for the joy set before Him endured the cross, despising the shame, and has sat down at..." Hebrews 12:2