Israelites in the Wilderness 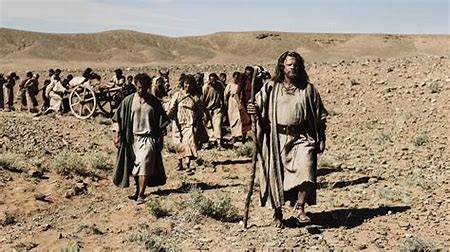 Did you know that about 30% of the Bible is Prophecy?  A prophecy is a message inspired by God, a Divine Revelation.  Prophecy often predicts future events, but is not limited to foretelling the future.  Many Biblical prophecies have already been fulfilled, many are yet to be fulfilled.   Often, Biblical prophecies have multiple fulfillments (they are fulfilled more than once) because the Bible is the Living Word of God.   God uses patterns and cycles to teach us important truths.  Prophecy that has been fulfilled is a POWERFUL witness to the reality, the perfection, and the omnipotence of YHWH God.

God told Abraham (hundreds of years before it happened) that his descendants (the Israelites) would be slaves in a foreign land for 400 years (Genesis 15:13).  History tells us that the Israelites were indeed slaves in Egypt for 430 years (Exodus 12:40) before God lead them out through his servant Moses.  This was a fulfillment of the prophecy given to Abraham hundreds of years before the fulfillment.

After the Israelites had received the PASSOVER, God lead the them out of Egypt (slavery) and into the wilderness, intending to bring them into the promised land.  In the wilderness, the Israelites entered into the Mosaic Covenant with God.  This Covenant was not like the Abrahamic Covenant, because the Mosaic Covenant required Israel to OBEY God.  Israel willingly entered into this Covenant, and basically, they became “married” to YHWH in the wilderness.  In this “marriage Covenant”, God told Israel that if they obeyed Him, they would be blessed beyond measure, but if they disobeyed, and followed after “foreign gods/idols”, then they would be cursed.  In the eyes of YHWH God, idol worship (worshipping other gods) was akin to adultery in His Marriage Covenant with Israel.  Idolatry = Spiritual adultery, unfaithfulness in marriage.

Israel sinned right off the bat!  In the wilderness, the Israelites built a “golden calf” to worship.  They were too impatient to wait for Moses to return from the mountain where he had gone to receive the 10 commandments from GOD.  The impatient Israelites decided that they would worship the “gods” of Egypt while Moses was gone.  This angered YHWH. Then, Israel sinned again when they did NOT trust that their “husband” YHWH could help them defeat the giants who were inhabiting the Promised land!  When Israel arrived at the Promised Land (the land promised by YHWH to their forefathers), they sent in 12 spies to check out the land.  When the spies saw the immense size of the inhabitants of that land (giants/nephilim), only 2 spies BELIEVED that YHWH could defeat these beings (Joshua and Caleb). The remaining 10 spies absolutely did not believe that God could defeat the giants.  Remember, they had just seen God part the red sea!!!  They were being fed supernatural MANNA from HEAVEN, and drank from springs of water that God had brought out of dry rocks!

There were 12 Tribes of Israel moving through the wilderness.  The man Jacob who had been renamed Israel by God, had 12 sons.  These were the 12 Tribes of Israel.  The Levites (named after Jacob’s son Levi) became the Priests, and performed the animal sacrifices and ministry in the Tabernacle.  They were the only ones who were not promised a parcel of land in the Promised Land.  While in the wilderness, the Israelites camped in a very specific pattern.  The Tabernacle was in the middle along with the levites (priests).  There were 3 tribes on each side (North/south/East/West)… surrounding the Tabernacle, 12 Tribes total, forming a CROSS!  Talk about structure!!!  Every time the Israelites set up camp in the wilderness, they did so in the shape of a cross!!!  You see, Jesus IS in the Old Testament….hidden in plain sight!!!  The Old Testament is the New Testament concealed and the New Testament is the Old Testament Revealed!

Israel’s whole existence is a physical representation of an even more significant spiritual truth.  The only way to leave sin (Egypt) and enter the Promised land of Heaven is through God’s Son Jesus, who died on a cross to cover the sins of all mankind. Jesus IS the Passover Lamb of God.  Once a person receives the Passover Lamb (allows Jesus to reside within his/her heart), then the angel of death has officially “passed over” them.  After leaving Egypt (sin), it’s onto the wilderness journey.  Though this journey is a difficult one, wrought with temptation, trials, tribulations, sorrow, and pain, it’s a necessary part of our journey because it’s the place where we ‘MEET GOD’.   As the Israelites camped in the wilderness in the shape of a Cross, Christians are anchored by Jesus, who died on a cross for us.  When we receive Jesus into our hearts, HE gives us His Holy Spirit, who acts like the Pillar of fire and the pillar of cloud.  Like God’s Glory cloud in the wilderness, God’s Holy Spirit comforts us, guides us, and dwells within us day in and day out.  Most people who have a relationship with Jesus Christ will tell you that it is in the wilderness of life,  when life is at it’s most difficult, that they find God.

Gold is a very precious metal, mined from the earth.  But, when it’s first pulled from the earth, it’s dirty, and dull, and not very beautiful.  However, even in its impure state it’s still very valuable.  When gold is heated over the fire, the impurities will rise to the surface.  Then, what is impure can be skimmed off, and what is left is beautiful, shiny, and pure.   This is the process that the believer in Yeshua (Jesus) will we go through during their wilderness journey before God brings them into the Promised Land.  But make no mistake, if you LOVE Jesus Christ, you are already valuable to God, and He (YHWH, Jesus, Divine Trinity God) WILL bring you into the Promised Land of Heaven at the appointed time.