Shavuot – the giving of the Law

Pentecost, the 50th day of the counting of the Omer (wave sheaf), also commemorates the day when Moses went up Mt. Sinai to receive the law (ten commandments).  This Jewish Holy Day is known as Shavuot.  The law was given to Moses, by God, about 1500 years prior to the gifting of the Holy Spirit in 33AD.  What exactly is “the law”, to whom was it given, and does it still apply?

The Story of Moses receiving the ten commandments is found in the book of Exodus, the second book of the Bible.  In about 1440 BC, Moses and the children of Israel fled Egypt, and a couple of months later arrived at the base of Mt. Sinai.  Moses went up the Mountain, and the people remained behind.  The people were warned not to go near the base of the Mountain, lest they die.  God’s Glory is so bright, unless properly prepared, our human flesh cannot survive His presence.  God made special preparations so that Moses could survive.  A thick cloud settled upon the Mountain, the glory Cloud of God.  Scripture actually depicts Moses making three trips up the Mountain to receive God’s laws and His Blueprints for the Tabernacle.  The Tabernacle is the Tent that would later become the center of worship and also where God’s Glory would dwell with the Israelites.  God’s Will has always been to dwell among His people; however, mankind’s sin has made that difficult and complicated.

The book of Exodus details Moses’ trips up the Mountain to meet God.  In his first trip, Moses remained on Mt. Sinai for forty days.  The Israelites became impatient and decided that Moses wasn’t coming back.  Therefore the Israelites begged Moses’ brother Aaron, the High Priest, to melt down the Egyptian gold and silver, that they had brought with them,  and fashion an idol, a golden calf for them to worship.  This may sound strange, but the golden calf was a representation of a demonic entity that was worshipped in Egypt.  It was the representation of an Egyptian “god”.  Apparently the Israelites thought that this would be good idea.  Wrong!

Imagine this, the Creator God, the Real God YHWH Elohim, had just a couple months earlier, sent plague after plague to Egypt (where the Hebrew people had been enslaved) to convince the Egyptian Pharoah to set them free.  After letting the Israelites go free, Pharoah changed his mind, and his powerful army chased them straight to the Red Sea.  The Israelites were trapped.  Pharoah’s army behind them, the sea in front of them, they had nowhere to go.  They were terrified and were certain that they would die.  But God, YHWH, intervened in a mighty way, and literally parted the Red Sea, giving them an escape route.  The Hebrew people, with a wall of water on either side, walked across on dry land.  Pharoah’s army chased after them, across the dry land, with a wall of ocean standing on each side.  God then had the sea walls “let down”, and the sea covered Pharoah’s army, drowning every last one of them. God would NOT let Pharoah’s army slaughter the Israelites, His Chosen people. 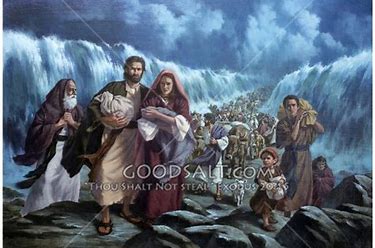 After experiencing all of these miracles, the Israelites couldn’t wait 40 days before they decided to go back to Egyptian worship.  Wow!  Of course, YHWH was angry with them.  Moses was furious with them.  Moses came down the Mountain with the ten commandments written on tablets of stone by the finger of God.  When Moses saw the people worshipping the golden calf, he was really angry and literally smashed the two tablets that held the ten Commandments.

The people gathered around the base of the Mountain, and saw the thick cloud, the smoke from the top of the mountain, and heard the thunderous voice of God in the air, and they were scared!  They agreed with the voice to do all that God’s commandments told them to do, and then they begged Moses to go up the Mountain alone because they were afraid to be anywhere near God.

Exodus 19:16: So it came about on the third day, when it was morning, that there were thunder and lightning flashes and a thick cloud upon the mountain and a very loud trumpet sound, so that all the people who were in the camp trembled.

Moses did indeed go back up the Mountain to collect a second set of the Commandments.  The Bible tells us that when Moses returned, his face was literally shining in a supernatural way because he had been in the presence of God.  This also scared the people so much that Moses had to wear a scarf over his face so as to hide the shining.

I don’t know about you, but it’s really amazing to consider the miraculous way in which God delivered the Israelites and then the ten commandments.  These ten commandments, along with the 613 oral laws, later became known as “the Law”.  God basically revealed His mind, His rules, to the Israelites.  These laws were God’s expectations of Holy Living.

Please join us again when we detail a bit more about the Mosaic Covenant and the Law.  Standing on this side of His story (history), we know that the Mosaic Covenant has been replaced by the PROPHESIED New Covenant, a better covenant, where God wrote His laws on the hearts of mankind.  This happened at Pentecost, when the Disciples received the Holy Spirit.

Shelter from the Storm by Skylee Shea