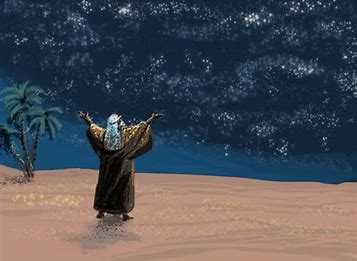 We’ve heard alot about this man Abraham, the supposed “father of three major religions” (Judaism, Christianity, Islam). Who was he?  What did he do?  Why do all 3 religions claim Abraham as an important patriarch of their religion?

Abraham lived in ancient Mesopotamia, the cities built by Nimrod. Abraham’s father Terah worshiped ‘the gods’…of ancient Mesopotamia (demons) (Joshua 24).  Abraham did not believe in these “many gods”, and began seeking the truth about the True God.  Abraham was originally named Abram, but God later changed his name to Abraham meaning “Father of many”.  God, the Father, YHWH, called Abram out of Mesopotamia (land of “many gods”) to a land that God would give him and his descendants.

We could talk all day long about the adventures of Abraham on his journey to the “promised land”.   For expediency’s sake, we’ll “cut to the chase”.  God entered into a very important Covenant with Abraham. This is known as the “Abrahamic Covenant”. This is actually where we get the phrase…. “cutting Covenant”.  In the ancient world, when a Covenant was “cut” between two parties, they would sacrifice an animal (animals were greatly valued), and then (this sounds gross), they would cut the animal in half, and “walk between the pieces.  This symbolized the idea that whatever happened to those animals, let it happen to either party who would break the Covenant.

When God entered into Covenant with Abraham, God put Abraham into a “deep sleep”, and then God, Himself, walked in-between the pieces appearing like a “burning torch”.  What this means is that God, Himself, would be the ONLY ONE responsible if either party broke the Abrahamic Covenant.  Of course, YHWH is Faithful, therefore it is 100% impossible for God to break His own Covenant.  This was an unconditional Covenant, so nothing was expected from Abraham, besides Faith.  Faith is basically believing God, even when our physical eyes see something else.   We find out later, much, much later, that Jesus Christ (the promised “Seed”/God in the flesh), is the One who paid the price for all mankind.

Abraham was promised three things in the Abrahamic Covenant..

Abraham believed God and it was “credited to him as Righteousness” (in right standing with God).  But after a few years, Abraham and his wife Sarah started to wonder about this “promised seed/descendant”.   Sarah was way beyond the age for child-bearing.  Although they believed God, they began to wonder if maybe they had “heard wrong”…or maybe there was something extra that they had to do in order to force the fulfillment of this promise.  How could Abraham be the father of a multitude of nations, without a single heir?

Enter Hagar.  Sarah had a young, Egyptian hand-maid named Hagar.  Since Sarah was having trouble getting pregnant (it just wasn’t happening), she and Abraham decided to use Hagar as a type of surrogate mother.  So, Sarah sent her handmaid Hagar to “lie” with Abraham, and they conceived a son, Ishmael.  Do you think this ended well?  No way!!!  Envy and jealousy GREW between Sarah and Hagar.   Even though this was Sarah and Abraham’s “plan”, things weren’t working out too well.  This was NOT God’s plan, this was Sarah and Abraham’s plan.

God later told Abraham that the promised seed would NOT come through Ishmael!

Genesis 17: 18: And Abraham said to God, “O that Ishmael might live under Your blessing!”  But God said, “No, but Sarah your wife will bear you a son, and you shall call his name Isaac; and I will establish My covenant with him for an everlasting covenant for his descendants after him.

Now you may wonder what happened to Ishmael?  Well, he was about 13 years old when Sarah had Isaac.  At this point, there was a “great jealousy” between the two women as Hagar wanted the BIRTHRIGHT of Abraham to go to her son Ishmael.  Sarah, who understood that the Birthright had to go through Isaac, sent Ishmael and Hagar away, back to Egypt.  Ishmael is the father of Islam and is one of the reasons that there is so much animosity between the Jewish and Islamic people!  The Birthright and the “Promised Seed” would come through ISAAC, NOT ISHMAEL!

Isaac grew up to become the Grand-Father of the Jews, and eventually, through whom really did come the prophesied Messiah…Yeshua (Jesus).  Ishmael was also given promises to become a “great nation”.  He would have many descendants.  These are the prophecies given to Hagar regarding her son Ishmael…

10 And the angel of the Lord said unto her, I will multiply thy seed exceedingly, that it shall not be numbered for multitude.

11 And the angel of the Lord said unto her, Behold, thou art with child and shalt bear a son, and shalt call his name Ishmael; because the Lord hath heard thy affliction.

Abraham became the father of Isaac, the one through whom the Covenant would continue.  Isaac grew up, married Rebekah and fathered two children (twins), Jacob and Esau.  Although Esau was the firstborn of the two twins (birthright usually goes to the firstborn), Esau sold his birthright to Jacob for a bowl of soup (literally).  But, this was actually pre-determined by God, who had told Esau’s mother Rebekah that the Birthright would be given to Jacob.  The promises of the Covenant passed to Jacob, not his brother Esau. (Genesis 25)

God YHWH (who often renames people) renamed Jacob ….”Israel” , and Israel (formerly named Jacob) became the father of 12 sons (The 12 Tribes of Israel).  These 12 Tribes grew into a “Great Multitude” (Millions) of people. 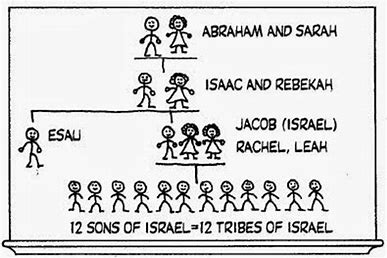 The Hebrew people, now numbering in the millions, end up in Egypt, working as slaves to Pharoah.  This is where we see Moses, who is called to lead God’s people “out of Egypt”.  Here is a simplified timeline.  There appears to be about 430 years in-between Abraham and Moses.

One more thing to add.  We started off this post with the statement that all 3 “religions” claim Abraham as their “founding father”.  The Bible tells us that Abraham was the father of Ishmael (Islam), but the Promise, the Covenant, would NOT be fulfilled through the descendants of Ishmael.  The Promised seed was to come through ISAAC, the Covenant was through ISAAC!!   Isaac is the father of Jacob (renamed ISRAEL), who is the patriarch of Judaism, and the twelve (sons) tribes of Israel. Also, the LAND was promised to the Jewish people, the descendants of Isaac.  This means that when there is an argument over Jerusalem or the nation-state of Israel, it REALLY IS the ETERNAL CAPITAL of the JEWS. However, the TRUE PROMISED LAND that is SPIRITUAL (THE KINGDOM OF GOD/HEAVEN) belongs to all those who follow the Prophesied Messiah, Yeshua Jesus.

Then, where does Christianity come into this?  The Bible specifically tells us Jesus’ lineage, and it’s Jewish from the tribe of Judah, the “house” of King David.  The Bible tells us that the Jews are the “natural branches” of the Olive Tree (Israel), but ALL Gentile (non-Jews) Believers who BELIEVE in JESUS as MESSIAH are GRAFTED INTO the OLIVE TREE!  The Name Israel refers to more than just an individual (Jacob), more than just the Jewish people, more than just a nation-state.  Israel is the Family of God (YHWH, ELOHIM, the Triune God).  ALL GENTILE (non-Jew) BELIEVERS who BELIEVE IN JESUS as the PROPHESIED MESSIAH, literally are adopted by God, and become a part of Israel (YHWH’S FAMILY).  Yes, the Jewish people are promised the land of Israel on earth, but All people who believe in YESHUA the MESSIAH get to go to the TRUE PROMISED LAND, HEAVEN, THE KINGDOM OF GOD.

The Graphic below shows that Christianity has it’s roots in Judaism.  Although neither the Christian people nor the Jewish people truly recognize their “kinship”, the time is soon coming when Jesus will bring them back together, Jew and Gentile, one under Messiah Jesus.  Jesus is the ONLY plan of salvation for the world.  Those who follow all other religions have the same opportunity as all mankind…to receive the JEWISH MESSIAH JESUS, who is also the MESSIAH for ALL MANKIND!!!  A religion cannot save anyone!  Jesus is the Only Name by which a man can be saved.  There is NO OTHER RESCUE PLAN for MANKIND!!!  There is no other truth. There is only THE TRUTH, and His Name is JESUS!

"Even the sparrow has found a home, and the swallow a nest for herself, where she may have her young—a place near your altar..." Psalm 84:3

Counting of the Omer