What is it about Jerusalem?

When I was younger, I used to wonder what is so special about Jerusalem, that tiny plot of land.  It seems like the Middle East, always in turmoil, is constantly fighting over Jerusalem.  Terrorism, rioting, war, turmoil always seems to surround this tiny piece of land.  Why? 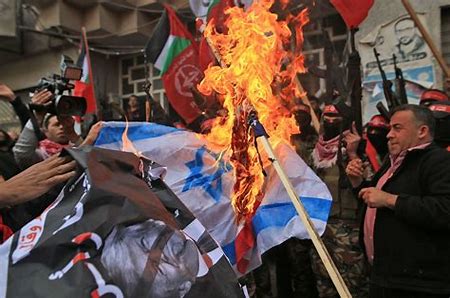 I remember thinking, why do people care so much?  The whole earth belongs to God, why is there so much fighting over Israel and Jerusalem?  Every year the United Nations gathers to condemn Israel and declare that Jerusalem should be divided into two States, Palestinians and Jewish.  Why?

Is there something more here than meets the eye?

Zechariah 12: The burden of the word of the Lord concerning Israel.

Thus declares the Lord who stretches out the heavens, lays the foundation of the earth, and forms the spirit of man within him,2 “Behold, I AM going to make Jerusalem a cup that causes reeling to all the peoples around; and when the siege is against Jerusalem, it will also be against Judah. 3 It will come about in that day that I will make Jerusalem a heavy stone for all the peoples; all who lift it will be severely injured. And all the nations of the earth will be gathered against it.

As we stated earlier in this blog, we have to go back to the beginning to get a TRUE picture of what is happening now and WHY.    Jerusalem has a very long, rich history.  The Bible makes it clear that this small plot of land is VERY important to God.  The name of the city, Jerusalem (Yerushalaim or Yerushalayim) means “foundation of peace, or founded peaceful (city of peace), and yet this city has been far from peaceful.  We know this city is important to God because He, YHWH, the I AM , literally placed His Name on the city of Jerusalem.

2nd Chronicles 6:6: but I have chosen Jerusalem that My name might be there, and I have chosen David to be over My people Israel.‘

What does the Bible tell us about Jerusalem?  First, and very importantly, the Bible lets us know that the land that would become Jerusalem was part of the Promised Land in the Abrahamic Covenant that was extended to Isaac and Jacob (Israel).  God gave Jacob (Israel)’s descendants the land of Canaan “from the river of Egypt unto…the river Euphrates”.

To your descendants I have given this land,

From the river of Egypt as far as the great river, the river Euphrates:

God declares the end from the beginning.  After the flood, the Bible states that Noah drank too much wine (got drunk) and while he was passed out on his bed, his son Ham uncovered his father’s “nakedness” , and basically ridiculed his father.  There was likely more to this story than the Bible details.  Shem and Japheth refused to partake in the humiliation of their father.  When Noah awakened, he cursed Canaan, Ham’s son.  But why did Noah curse Canaan (his grandson) and not Ham since Ham was the one who had committed this offense?  Good question. Many people have speculated possibilities as to why the curse fell on Canaan and not Ham.

Although we can’t really know for sure, the book of Jubilees, an ancient source that was used by the early Church Fathers to “fill in the blanks” of some portions of the Bible, may give us some answers.  The Book of Jubilees is actually part of the Eastern Ethiopian Orthodox Church’s canon (included directly in their Bible), but for the rest of Christianity, it was not included in the Canon, and is considered an “extra-biblical source.  There were fragments of the book of Jubilees found in the Dead Sea Scrolls.  The book of Jubilees is also called “Little Genesis”.

In Jubilees 8, Noah divides the entire earth between his 3 sons, Shem, Ham, and Japheth.  Shem is given a very blessed portion, possibly because he was the one who had the largest part in covering his father’s nakedness.

Here’s a very short verse in Genesis 10 (Bible) that does seem to confirm the Jubilees 8 (extra-Biblical source) account of the division of the earth to Noah’s sons Shem, Ham, and Japheth….in the “days of Peleg” (Shem’s grandson).

Genesis 10: 21 Also to Shem, the father of all the children of Eber, and the older brother of Japheth, children were born. 5 Two sons were born to Eber; the name of the one was Peleg, for in his days the earth was divided; and his brother’s name was Joktan.

Jubilees 8: 12 And there came forth on the writing as Shem’s lot the middle of the earth which he should take as an inheritance for himself and for his sons for the generations of eternity, from the middle of the mountain range of Rafa, from the mouth of the water from the river Tina, and his portion goes towards the west through the midst of this river, and it extends till it reaches the water of the

abysses, out of which this river goes forth and pours its waters into the sea

Me’at, and this river flows into the great sea. And all that is towards the north is

Japheth’s, and all that is towards the south belongs to Shem.

their father, and he bound them all by an oath, imprecating a curse on every one that sought to seize the portion which had not fallen to him by his lot.

The descendants of Shem inherited the Middle of the earth, including what would later become Jerusalem. Note that this “oath” was to last FOREVER.

Jubilees 9: 1 And in the third week of this jubilee the unclean demons began to lead astray the children of the sons of Noah, and to make to err and destroy them.

30 And Ham, his father, and Cush and Mizraim his brothers said to him: ‘You

have settled in a land which is not yours, and which did not fall to us by lot: do not do so; for if you do, do so, you and your sons will fall in the land and (be) accursed through sedition; for by sedition you have settled, and by sedition will your children fall, and you shall be rooted out forever. 31 Dwell not in the dwelling of Shem; for to Shem and to his sons did it come by their lot.

32 Cursed are you, and cursed shall you be beyond all the sons of Noah, by

the curse by which we bound ourselves by an oath in the presence of the kodesh (Holy) judge (YHWH), and in the presence of Noah our father.’ 33 But he did not listen to them, and dwelt in the land of Lebanon from Hamath to the entering of Egypt, he and his sons until this day. 34 And for this reason that land is named Canaan.

There is much, much more to the story of Israel and Jerusalem, but the book of Jubilees details what took place in the VERY beginning and confirms the Biblical account of the Abrahamic Covenant.  After the flood, the middle of the earth (middle East/Asia) was given to the descendants of Shem, but the Canaanites rebelled and decided to take part of Shem’s land (the part that included Jerusalem) for themselves.  For this reason, the Canaanites were cursed….forever.  This MAY have something to do with the Biblical account of why Noah cursed Canaan (and the Canaanites) and not his father Ham, who had been the one to uncover his nakedness.  God, who is outside of time and space, knows HIS STORY before it happens.

But this still leaves us wondering, what about the problems in Jerusalem today?  Well, the book of Jubilees shows that the land of Israel, including Jerusalem, was given to the descendants of Shem, the Semites (Jewish people).  The Biblical account of God’s Covenant with Abraham confirmed what had been promised to Shem’s descendants in the days of Noah.  Although the land promised to Abraham’s descendants was far smaller than what was promised to Shem’s descendants, it seems to particularly include the portion that had been stolen by the Canaanites. We do know, from the Bible, that God clearly told Israel to drive the Canaanites out of the Promised Land, and even to destroy them because they were evil.

Deuteronomy 20:16:  However, in the cities of the nations that the LORD your God is giving you as an inheritance, you must not leave alive anything that breathes. “But you shall utterly destroy them, the Hittite and the Amorite, the Canaanite and the Perizzite, the Hivite and the Jebusite, as the LORD your God has commanded you,

During his address at the UN Security Council meeting in which he called on the international community to hold a Middle East peace conference, with the goal of launching multilateral negotiations, the President of the Palestinian Authority, Abbas claimed that the Arab residents of Judea, Samaria, and Gaza were in fact descended from the ancient Canaanites.

“We are the descendants of the Canaanites who lived in the land of Palestine 5,000 years ago, and continuously remained there to this day. Our great people remains rooted in its land. The Palestinian people built their own cities and homeland, and made contributions to humanity and civilization.”                        Arutz Sheva

The Canaanites were evil, pagan worshippers, who sacrificed their children to their “god” baal (a demon).  They may have been hybrid breed, mixed with Nephilim blood, “giants in the land”.  They had stolen the land given to Shem’s descendants.   We don’t know if they exist today, or not.  Although the PA President Abbas claims to be a descendant of the Canaanites, this doesn’t make it true. Even if it is true, it’s not a compliment and definitely NOT a justification to take or divide the land of Israel OR Jerusalem that was given by YHWH Elohim, the Creator of the Universe, to the Shemites, the descendants of Shem and Abraham. Could the Palestinians actually be descendants of the Philistines, ancient enemies of Israel?

The name Philistine comes from the Hebrew word Philistia and the Greek rendering of the name Palaistinei, giving us the modern name of Palestine.  It is thought that the Philistines originated in Caphtor, the Hebrew name for the island of Crete and the whole Aegean region (Amos 9:7; Jeremiah 47:4).

There is something special about this land, “The Holy Land” of  Jerusalem, the city where the God of the Bible has placed His Holy Name, the city where God’s Son Yeshua (Jesus) was crucified.  Although there is an ongoing dispute between the Palestinians and the Jews, between the Canaanites and the Shemites, it all boils down to a much bigger battle between satan and YHWH.  Do you think that satan wants control of the city that is called by YHWH’s Holy Name?  You can bet he does!