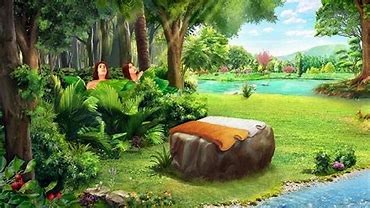 After the Fall of man, and Adam and Eve’s pathetic attempt to clothe themselves in fig leaves, God saw their embarrassment, their fear, their feelings of vulnerability and He felt compassion for them.  And…there was more.  God did something very unexpected!  God killed some animals (remember there had been no death in the Garden before this), and He literally sewed Adam and Eve clothes out of the animal skins.  Wow, the Creator of the Universe LITERALLY SEWED clothes for Adam and Eve!  Think of how horrified and yet thankful Adam and Eve probably felt.  Remember, they had never seen death before.  But, now, suddenly, it had become all too real, the consequences of their actions.  We cannot hide our sin-filled flesh, but God’s got us covered!

Also, there’s more here than even meets the eye.  God clothed Adam and Eve in Animal Skins by sacrificing INNOCENT animals.  Why did God do this?  Does God hate animals?  NO!

Adam and Eve were guilty of sin before a Holy God. The immutable Creation principle, God’s complete Holiness and Righteousness,  DICTATE that sin cannot just be “whisked away”. A price must be paid for all sin!  The soul that sins will die!  God tells us in His Word that “The Life of all FLESH is in the BLOOD“.  Adam and Eve were now mortal FLESH and BLOOD.  Physical death is separation from the EARTH.  Spiritual, PERMANENT DEATH, is to SEPARATED from our CREATOR FOREVER!So, God, in His Mercy, shed the blood of an innocent animal (PHYSICAL DEATH) and used its skin to cover Adam and Eve (Physically) & it’s blood to cover Adam and Eve Spiritually!  God used the substitution principle that He established to SAVE ADAM AND EVE!  I know this may be a difficult concept to grasp.  God did NOT literally take the blood of this animal and spread it all over Adam and Eve to cleanse them from sin.  What He did is set up the Sacrificial System that utilizes the Substitution Principle!Because sin always has a consequence, Adam and Eve did eventually die a physical death about 1000 years later, but they did not die the Spiritual death because of God’s act of Compassion!

Think about how enraged the enemy must have been!  It’s like this GIANT COSMIC chess match…and God is always 5 steps ahead!  The serpent thought he had it all figured out. Get Adam and Eve to sin, then happily watch them become separated from God FOREVER and die a PERMANENT DEATH.  And…watch GOD MOURN the loss of HIS BELOVED CHILDREN!!!   Oh, he must have RELISHED the thought!!!   But God changed everything with HIS unexpected, compassionate ACT!!!

Please join us next time when we detail the seriousness of eternal death, and what exactly it is that God saved us from!