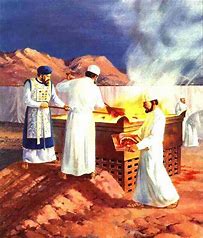 The sacrificial system is very foreign to those of us living in the West in the 21st century.  But, in the days of Ancient Israel, and even further back than that, it was well understood.  God established the sacrificial system in the Garden of Eden as a way to atone (repair, reconcile) for the sin of mankind.  The enemy tempted Adam and Eve in the Garden, and they sinned.  Therefore God set up the Sacrificial system to bring them back into right relationship with Him.  He did this through the Substitution principal, the blood of the innocent in exchange for the blood of the guilty. The life of the Flesh is in the blood.  Without the shedding of blood there can be no forgiveness of sin.

For this reason, God taught the Hebrew people, in the Old Testament, the sacrificial system, whereby certain kinds of animals (clean animals) would be sacrificed and their blood be used for the atonement of sin.   Though this sounds barbaric today, it was common place in those days.  Likewise, in most cases, the remainder of the animal was used to feed the Temple Priests who were administering the sacrifices.  We find out in the New Testament that the whole reason God established the animal sacrifices was to ultimately point to the day when He would clothe Himself in human flesh, live a sinless life, and be the final atonement for the sin of all mankind.  Sin cannot be simply “whisked” away, there always has to be a payment, a consequence for sin.

One of the reasons that the sacrificial system was so well known in ancient times is because other cultures began to copy God’s system that He had established in the Garden of Eden.  But these false pagan religions made blood sacrifices, not to the True God, but rather to their false, pagan gods.  These pagan gods were basically satan and his fallen angels, masquerading as God.  When satan discovered God’s system, he decided to use it for himself because he wanted to be worshipped. However, satan took God’s system and morphed it into human sacrifice, often requiring his “worshippers” to sacrifice children because of their innocence.  The True God,  YHWH, declared the practice of sacrificing children an ABOMINATION!  YHWH God set up the system to save mankind.  The devil copied the system to kill mankind and to satisfy his pride.

Make no mistake, the devil comes to steal, kill, and destroy, but God comes to GIVE LIFE!

"Even the sparrow has found a home, and the swallow a nest for herself, where she may have her young—a place near your altar..." Psalm 84:3

Counting of the Omer