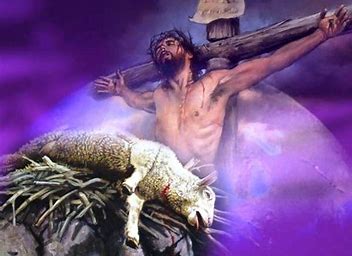 How do I introduce Jesus in just a few short paragraphs?  Where do I start?  As we saw from previous posts, God Almighty set up the Sacrificial system in the Garden of Eden, setting up the substitution principle whereby the blood of the innocent could atone for the blood of the guilty.  God’s Word states that the soul that sins will die.  Sin is breaking God’s laws, basically walking according to what is right in our own eyes, not His.  He is, after all, the Creator of everything.  God’s Word is unchangeable, therefore, sin cannot just be whisked away.  Sin demands a price, a very high price.  God KNEW we would sin!  Because God is merciful and LOVES mankind, His plan, from the very beginning, was to eventually clothe HIMSELF in the likeness of human flesh, live a sinless life, and die on a Cross for the sins of mankind.  This is the God we serve.

Jesus, whose name in the Hebrew is actually Yeshua, was born of a Virgin.  About 2000 years ago, a young Jewish woman named Mary was engaged to a man named Joseph.  Mary was from a small town called Nazareth, located in what is today the Golan Heights, Israel.  They were to be married. Before they married, or shared a bed, the Angel Gabriel visited Mary and told her that she was chosen to bring forth the Savior of the World, aka The Messiah.  Mary was a little scared, but she was also happy. (Luke 1:26-35)

(Let’s see…visit from an ANGEL (supernatural being), told she would have conceive the Savior of the world, told God would be the Father and it would not involve sex, understanding that Joseph and others wouldn’t believe her…I’d say she had reason to be scared!)

Mary knew that people would think she had cheated on Joseph. In those days, a girl could be stoned to death for a sexual crime like adultery or fornication (sex before marriage). Mary understood that the townspeople of Nazareth would NOT believe that she was still a virgin.  With Mary’s nervous, but obedient consent, God’s Spirit came over her and she conceived the Messiah Jesus.  This was a Miracle of God and did NOT involve any type of sexual activity!   The Angel Gabriel then confirmed to Joseph that although Mary was pregnant, she was a still virgin.  After all, Joseph had been understandably upset when he first found out about Mary’s pregnancy.  But Joseph, who loved her and BELIEVED the ANGEL, spared her life, and went forward with the marriage plans.

Remember, it was Eve’s “seed” who would crush the head of the Serpent.  (Genesis 3:15) This is because it was the human mother who would bring forth the savior, not the father. The Father of the Savior, JESUS, is GOD, not man.  The Miraculous virgin birth allowed for the Savior of mankind, Jesus, to be born into the LIKENESS of human flesh.  Jesus’ flesh was human in every way…EXCEPT that he was not born with “original sin”.  This means that unlike EVERY OTHER HUMAN BEING on the FACE OF THE PLANET, Jesus DID NOT have sin embedded in his human flesh.

Jesus was born sinless, totally innocent of any sin, was filled with God’s Holy Spirit and equipped by God to live a completely sinless life.  Jesus was God, wrapped in the likeness of human flesh.  Fully human and yet fully God.  Jesus was the only One qualified to be the “lamb of God”, who would PERMANENTLY take away the sin of the world.  Lambs were known for their innocence and were often used in Jewish animal sacrifices.

Jesus, the completely innocent lamb of God, God wrapped in human flesh, was crucified at a place called Golgotha, or “place of the skull”.  Jewish Tradition states that this is the place where David slew Goliath, an evil giant, spawn of satan, and severed his head.  (We will talk more about Goliath in a later post).  It was at this place where Jesus’ feet were bruised (when they nailed them to the cross), and the head of satan was crushed.  It was this place where Jesus took upon Himself the sins of all mankind and carried them to the cross to be buried forever.  It was this place where Jesus, God Himself, shed His Blood as the innocent Lamb of God, to enact the Substitution principal for ALL MANKIND so that whosoever would BELIEVE in HIM would NOT PERISH, or DIE THE PERMANENT, SPIRITUAL DEATH, but rather, have everlasting life.  Messiah means Savior, or the Christ. Christ is NOT Jesus’ last name, Christ is HIS TITLE….meaning MESSIAH, or SAVIOR.

Jesus crushed the head of the serpent in the place called Golgotha because the serpent’s plan was for MANKIND, ALL MANKIND to was to DIE the PERMANENT DEATH.  But, because JESUS, the CREATOR of ALL MANKIND CHOSE to DIE A PHYSICAL DEATH, and shed HIS INNOCENT BLOOD (remember, the LIFE FORCE of ALL FLESH is in the BLOOD), and enact the substitution Principal (the life of the innocent in exchange for the life of the guilty), MANKIND was GIVEN A SECOND CHANCE TO LIVE!  This totally CRUSHED the head of the serpent, who had INTENDED to DRAG all of mankind down to the pit (outer darkness, permanent spiritual death, separation from our Creator) with himself and his minions!

The serpent was in total shock and disbelief that God the Creator, the most powerful, mighty being that has EVER EXISTED, would be WILLING to HUMBLE HIMSELF by clothing himself in FRAIL human flesh, taking all of our sin upon HIMSELF, and then taking that SIN to the cross  to BURY IT FOREVER.  The serpent was in shock!

Please join us again when we discuss what happened AFTER Jesus took our sins to the cross!

“You alone are the LORD. You made the heavens, even the highest heavens, and all their starry host, the earth and…” Nehemiah 9:6